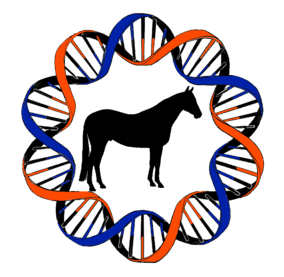 After graduating with her Bachelor’s in Animal Science from the University of Florida in 2014, Katie decided to find a program that would focus on animal genetics and became a part of the Brooks Equine Genetics Lab as a Master’s student in January 2016. Katie’s research interests involve exotics and conservation genetics. Her project evaluated a copy number variation in the equine genome and compare it to homologous rejoins in the horse’s closest ancestors: zebras, rhinos, and tapirs. In her limited free time, Katie enjoys reading, sleeping-in, and spoiling her Siberian Husky.

Zachary joined the Brooks Lab in November 2015. He began his undergraduate studies in August 2013 pursuing a Bachelor of Science majoring in Chemical Engineering and a minoring in Biomolecular Engineering. When not in the classroom, lab, or the library, he enjoys dedicating time to Chemical Engineers for Health a new club him and his classmates began in Fall 2015. In his leisure, Zachary enjoys travel, video games, going to the gym, playing basketball, and going to Gator sporting events.

Laura finished her Ph.D. in 2020 and now works as a professor at Sul Ross State University. She graduated as a Veterinarian in Brazil, at the Universidade Federal da Bahia, in early 2015. She worked in the lab back at Cornell University for a summer, for the Veterinary Investigator Program, and fell in love with the field of equine genetics. Her project focused on gait and anhidrosis. When not working, she loves riding and showjumping horses, cooking and spending time with her husband and dogs. 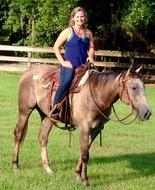 Casey graduated from UF in May of 2015, earning her Bachelor of Science with a dual major in Animal Sciences and Biology. Her work has focused on genotyping the UF herd of horses for various colors and diseases, along with validating mutations from whole genome sequencing. In her spare time she enjoys hiking the beautiful trails around Payne's Prairie, and keeping up with the latest blockbuster hits. 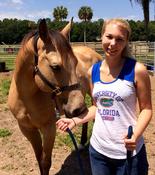 Amy graduated on her Master's program in 2016. She finished her Bachelor's degree at Cornell University.  She performed a candidate gene approach to identify the genetic mode of inheritance of Juvenile Epilepsy in the horse, in addition to identifying genes that might have an effect on the startle response in the Quarter Horse.  She enjoys working with cutting horses (or most horses for that matter), playing volleyball, and just about anything outdoors.

Mohammed joined the Brooks lab in the summer of 2012 at Cornell University, and graduated in May 2015. His research centers around whole genome variants discovery and genome wide association of size variation in horses. He also works on genome wide estimates of relationships and inbreeding levels in the Arabian horse. Whenever time permits, he enjoys picnics and outdoors activities with his son and wife. 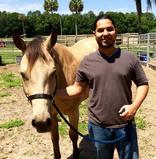 Heather moved to UF in June 2014, after finishing her PhD in Animal Science at Cornell University. Her graduate work focused on applying newer genomic technologies to study coat color and diseases in the horse. As a postdoctoral associate, she now also works with the Arabian oryx and dromedary camel. In her spare time, she enjoys nerdy computer things (like attending linux conferences and playing video games), creating disasters in the kitchen, and herding her two cats around her apartment. 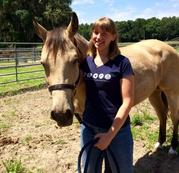 A lifelong horse woman, Dr. Samantha Brooks was diverted from vet school by a budding passion for equine research. Following a Bachelor of Science degree in Agricultural Biotechnology, Dr. Brooks remained at the University of Kentucky to study at the Gluck Equine Research Center. While there she earned her PhD in Veterinary Science, specializing in Equine Genetics under the mentorship of Dr. Ernest Bailey. Following her PhD she was awarded the Paul Mellon Postdoctoral Fellowship to study the expression of inflammatory genes in horses affected with laminitis. At Cornell University she was responsible for the Equine Biology and Management course for six years. Her research program explores a variety of topics relevant to horse health ranging from gene expression studies to mapping of genetic disorders in the horse. Previously her research group discovered genetic mutations and markers for coat colors, height, sarcoid tumors and two neurological conditions.  Ongoing work targets variation in gait, susceptibility to infectious disease, metabolic syndrome and skeletal defects using genome wide association, genome re-sequencing and transcriptomics. 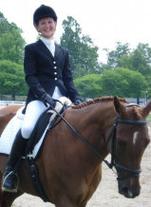 Alexa began her undergraduate studies in Biochemistry the fall of 2015 and joined the Brooks Lab in November 2015. As an avid horse lover with an unending love for the sciences, she hopes to pursue veterinary medicine with an equine specialization. When not busy with academics, she trains with the UF Rowing Team and the UF Equestrian Team and splits her spare time among the Chemistry Club and the Pre-Veterinary Club.

MSc. Samantha Lewis
Samantha graduated on her Master’s degree in Animal Sciences at UF. She graduated with her Bachelor’s degree in Biology from the University of South Florida in May 2014.  She worked on Equine Metabolic Syndrome in the Arabian horse. When not tending to her studies or doing lab work, she competes in the National Barrel Horse Association and  enjoys afternoon beach sessions with her dog.

Erica joined the Brooks Lab in May of 2015. She began her undergraduate studies at UF in July 2013, focusing on Animal Sciences with a minor in Disabilities in Society.  Erica is originally from Miami, FL and is hoping to attend graduate school in the near future. When she is not pulling all-nighters in the library, Erica volunteers for her community through a service organization called Circle K International. 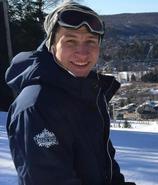 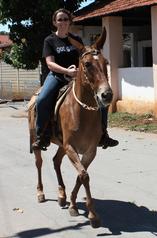 After graduating with a Master's degree in Animal Breeding from Oklahoma State University in 2009, Ann joined the Brooks lab in 2010 and finished her PhD in Animal Science at Cornell University in 2015.  Her graduate work focused on investigating the genetics of gait, behavior, and size in the Tennessee Walking horse and other gaited horse breeds.  She continued investigating gait in horses as a postdoctoral fellow at Uppsala University in 2016, and is now exploring additional performance traits in dogs, goats, horses, and cattle as a postdoc back at Cornell.  In her spare time, Ann enjoys riding her Tennessee Walking horses, reading, and watching movies with her crazy cats.